Recently, searching my bookcase for details for my memoir, I pick out my dream journal for 1999, which was the year after my PhD graduation.  In January that year I returned to Zimbabwe, and went first to the villages in the northeast to revisit my farmer-friends, to show them the finished thesis, and to thank them for their essential part in the research. I celebrated my fifty-eighth birthday with friends near Mutoko before embarking on a cross-continent journey… first east to Mozambique, and the shore of the Indian Ocean. Then back to Harare before heading west to Namibia, and eventually the Atlantic shoreline. What follows is an excerpt from my journal written in the beach town of Vilankoulos, Mozambique.

Early morning. I’m lying inside my tent on a borrowed air mattress - not quite floating - while it pours rain outside. There’s a steady drip from the top of the tent onto a corner of the mattress as I write in my journal. I’m mostly dry but my feet are getting wet. I’d left the fly off the tent last night, as the moon was out when I went to bed. Too late to put it on now.

I’ve never been on a dhow. But here, off the coast of Vilankoulos they are plentiful, with their centuries-long tradition sailing the coastal islands off Mozambique. And further north following the seasonal monsoon winds back and forth across the Indian Ocean between ports in India, and back to the East African coast.  Will a dhow ride to one of the nearby islands be the perfect culmination of my road trip in Mozambique? 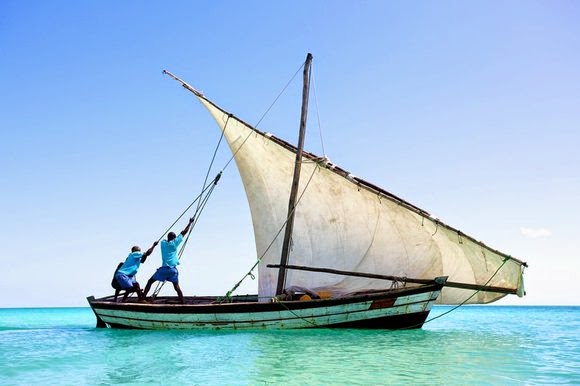 I sleep for a third night in my tent at Dodo’s Camp Site near the beach at Vilankoulos.  Michelle and Colin left yesterday, continuing their journey south toward Maputo, in their repaired VW Golf.
After a breakfast of orange juice, egg and chips at the campers’ café-cum-bar, I meet up again with Sebastian as we had arranged. He guides me south down
the beach to meet his friend Weston, who takes tourists and local passengers out-and-around Marguerita Island on his small dhow. Along the way I see another white woman with a backpack.  Like me, she is accompanied by a black guide. We stop and chat. She is Australian, and also travelling solo.   I suggest we team up for the dhow ride, but she says she’s read that it’s best not to take a dhow without a motor.  After we part, Sebastian gives me another reason.  “Her guide likes her,” he says. “He doesn’t want to let her go.”
Her hesitation reinforces my own about travelling on my own in a dhow with a young black crew. Transferring my anxiety to the weather, I glance out to sea and toward the sky and clouds, licking my finger to the wind. Sebastian is encouraging. “It’s a beautiful day. Yes, there is a smart wind. But look - the other boats out on the water - the wind is not too strong for them.” He’s right, the dhows are not heeled over. My intuition tells me to take on the adventure.  He introduces me to his friend Weston, and the other crew member, Nelson. The two men are young, fit, and clad lightly in bermuda shorts and t-shirts.  I look over the dhow. It’s a solid wooden sailing boat with room for about six. I pay Weston the fee - M$150,000 - for a sail to Marguerita Island and back. Sebastian guides me briefly up the beach to a kiosk where I rent a snorkel and flippers. Then he helps me clamber ungraciously aboard the dhow over its stern, and waves goodbye.
I move forward near the bow. Weston pushes off from the beach, jumps aboard and poles us out.  Nelson lowers the bulky rudder, hands it over to his captain before turning his attention to the mainsail. He pulls heavily on the rope attached to the huge triangular cloth. The sail grudgingly unfurls, tall and graceful, and quickly catches the wind. The boat picks up speed.  We sail well, mast gently heeled. I begin to relax and enjoy the sunshine, the view of the retreating coastline, and the sounds of the wind in the sail, its creaking boom. Indeed it seems magical.
After a while, I get my camera out of my small pack, and take photos all round. Nelson breaks a long stick of sugar cane and hands each of us a piece.
We chew, and suck on the sweet sticks, and spit chewed bits into the sea. When the sun gets too hot, I duck into the shade of the sail.  Gradually the dhow approaches Marguerita Island. We enter a cove on its west shore and as Nelson throws over the anchor, I strip down to my bathing suit and get ready to go snorkeling.  Nelson assures me he’ll keep an eye out for sharks.  Hmmm!
I’m also a bit worried about leaving my precious camera on board.  But it’s that or … no snorkeling. So I put on the flippers and with Weston’s help, let myself over the side of the boat into the cool water. I push off and swim further into the Island cove until I come to a coral reef. Face-mask down into the water, I marvel at the shapes and colors of the reef, the turquoise water flashing sunlight, and at the myriad of exquisite, tiny tropical fish of different patterns and colors, darting about the jagged coral pinnacles.  A paradise in miniature.
After a while, I swim back to the dhow and climb back aboard. Nelson tells me he and Weston will be staying on longer to fish, and I’m to return to the mainland by motorboat.  Not much choice for me …  I join the assigned boat - pack, camera and all - and the six passengers and crew return to Vilankoulos beach.
That evening, I feel rather alone and sad.  There’s no-one to share talking over the adventures of the day.  But I’d better get to sleep early.  The bus ,which is to begin my return journey, will pass through the local station at 3.00 a.m.  I’ll break camp at midnight, pack up and hike across town to the bus stop.
The dhow ride was indeed magical and for a short while I felt deeply connected to the centuries-long trade and adventure along the shores of East Africa.
at 12:00 PM 1 comment:

Return from Vilankoulos to Harare, 1999

I sleep little. Wake with a start. What time is it?  My watch reads just before 3:00 a.m. There’s no sign of the guard who’s supposed to wake me. I deflate the air mattress, take down the tent, pack up.  The nearly full moon lights my way as I walk southwest, then north around the Vilankoulos loop of small colonial-style houses to the bus terminal. Not a soul in sight. A mongrel barks at me from behind a fence.  The ticket office is closed, but I am prepared with cash to buy my ticket on board. The bus arrives on schedule at 4:00 a.m. I take a seat next to a middle-aged woman. Good, she speaks English. Spiwe is a teacher returning to Mutare, near Zimbabwe’s eastern border, after visiting her son in the Mozambique capital.
Hours later, heading north to Chimoyi the bus breaks down. We wait roadside for an hour or so, until a large open truck stops to pick up the remaining passengers. Spiwe and I stick together, as we’re hoisted up into the back of the truck by soldier-passengers. Also on board are several pretty young women who flirt with the soldiers as we travel on.  Two have babies tied to their backs. I think of the AIDS epidemic already raging in Zimbabwe.  Girls – don’t do it – protect yourselves! But even if I’d wanted to, we can’t converse. After several more hours travel west toward the Zimbabwe border we arrive, hungry and tired, to find the post closed for the night.  Spiwe and I are the only two planning to cross into Zimbabwe. I spread out my tent flat on the ground near the gas pumps outside the closed border office. We eat the last of our bananas and share blankets.  It’s cold!
Sunrise over the peaks of the Vumba Mountains is welcome and serene. When the border opens we pass through without delay. Spiwe guides me to the bus stop and waves goodbye as my bus departs for Harare. The mountain skyline retreats. The three-hour drive through the Midlands is peaceful and uneventful. As usual, at stops along the way, women vendors offer mangoes, bananas and other fruit and nuts for sale, from baskets on their heads which they bring to the bus windows. Once at the Harare bus depot, I take a taxi “home” to Lynde’s to relax and unwind – take a bath, do laundry, and sit out next to the pool where I finish reading the first volume of Doris Lessing’s Autobiography – her childhood and early adulthood in what was then Rhodesia.

4:30 a.m.  I wake warm and cozy under two quilts in Lynde’s spare bedroom.
The toilet is running. I get up to jiggle the handle.  The back verandah light is on,
and the kitchen door open, so Bruno has no excuse not to poop in the back garden.  Unregenerate dog. My feet are cold by the time I’ve made this short excursion.  Winter is coming to the Highveld.
Lying back in bed, I remember the question I woke with.  “What, dear God, can I do now with my life – now that the PhD is over and done with?  What is the highest, best use of my particular bundle of skills and talents?”  I think of the prayer:
“I desire and dedicate myself to give the best that I am and have to Life’s service.”
I read over the journal entries of my week in Mozambique, and before that, the week revisiting my friends in Mutoko.  There have been significant changes in the five years since I was last in the villages. Changes for the worse. AIDS is now rampant in Zimbabwe.  The Zim dollar is plunging.  The question all seem to be asking: “How will we survive?” And the answer “Only God knows.”
I’m moving on in a day or two. Heading west to Namibia – with a stay planned at an Oxfam project in Omaheke on Namibia’s eastern border. I pull out my copy of The Lonely Planet Guide to Southern Africa. Look at the map. Where am I going next? And what will be my next project?