One Woman's Journey from Apartheid to Ubuntu


One Woman’s Journey from Apartheid to Ubuntu

This title for my memoir came to me only recently, as I became aware of a significant focus in the collection of my stories from the 1990s with details and backstories of many months of PhD research in northeast Zimbabwe, and travel across southern Africa.
During ten years of my childhood in South Africa – the first decade of official apartheid - from 1948 to 1958, I was immersed in a life of white privilege. Our family home had a thirty-foot swimming pool and a tennis court in the back garden; we took yearly safaris to game reserves in the August holidays; and my sisters and I went to Roedean, one of the top private girls’ schools in Johannesburg.
It was in the senior-school history class at Roedean that I began to sense something missing in the lessons we were getting from ‘Dickie Bird’ (as we nick-named our history teacher). Although I had no way to explain the problem, I knew it was real. Then, with two years to go before matriculation (graduation) I had an option. I made the choice to take art and art history instead. And while I was certainly not one of our class’s top artists, it turned out to be an excellent decision. In addition to time for painting, sculpture and pottery, the art history class covered many eras, aptly named in our textbook, Art Through the Ages.
The book, which sits on a shelf in my library to this day, has over eight-hundred pages; sixty pages of glossary and index; with sections devoted to different eras and cultural regions of the world. Only five pages in the entire book are on African Art, under the subheading “Primitive Art” and within those few pages, sections only for West African Sculpture and ‘Bushman’ Painting. Despite this ‘all-but-Africa’ bias, I found art history intriguing, and was happy to leave Dickie-Bird’s class behind.
As I recount in this memoir, four decades later, in 1993, I return to Southern Africa - to Zimbabwe - and one of my first excursions was to the ruins of Great Zimbabwe.
There is a photo of me, standing on the carved steps to the Upper Ruins, my hands outstretched, the expression on my face not hard to interpret:
“How come no-one ever told me about the origins of this architectural wonder?” 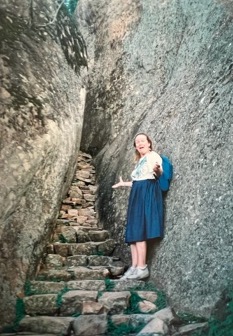 In the apartheid era, during my high-school years in South Africa, the ruins were ascribed to the Queen of Sheba. They could not possibly have been the work of an African civilization. It was only in 1980, when the ‘Second Chimurenga’ (struggle) ended, and Southern Rhodesia was renamed Zimbabwe, that the archeological information was allowed to be published. Great Zimbabwe was just the first of my 1990s “truth lessons” about African culture.
This memoir recounts many more. [and ‘Ubuntu’? … more to come]