The following is a 1974 article from the Detroit Free Press that came out shortly after the publication of Segregation and Integration: A Geography of People in Metropolitan Detroit: 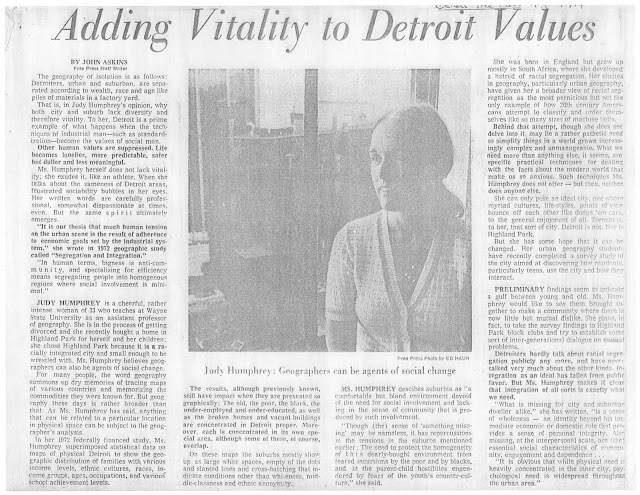 The geography of isolation is as follows: Detroiters, urban and suburban. are separated according to wealth, race and age like piles of materials in a factory yard.

That is, in Judy Humphrey's opinion, why both city and suburb lack diversity and therefore vitality. To her, Detroit is a prime example of what happens when the techniques of industrial man - such as standardization -  become the values of social man.

Ms. Humphrey herself does not lack vitality; she exudes it, like an athlete. When she talks about the sameness of Detroit areas, frustrated sociability bubbles in her eyes. Her written words arc carefully professional,  somewhat dispassionate at times. even. But the same spirit ultimately emerges.

"It is our thesis that much human tension on the urban scene is the result of adherence to economic goals set by the industrial system," she wrote in a 1972 geographic study called "Segregation and Integration."

"In human terms, bigness is anti-community, and specializing for efficiency means segregating people into homogenous regions where social involvement is minimal."

Judy Humphrey is a cheerful, rather intense woman of 33 who teaches at Wayne State University as an assistant professor of geography. She is in the process of getting divorced and she recently bought a home in Highland Park for herself and her children; she chose Highland Park because it is a racially  integrated city and small enough to be wrestled with. Ms. Humphrey believes geographers can also be agents of social change.

For many people, the word geography summons up dry memories of tracing maps of various countries and memorizing the commodities they were known for. But geography these days is rather broader than that. As Ms. Humphrey has said, anything that can be related to a particular location in physical space can be subject to the geographer's analysis.

The results, although previously known, still have impact when they are presented so graphically: The old, the poor, the black, the under-employed and under-educated, as well as the broken homes and vacant buildings are concentrated in Detroit proper. Moreover, each is concentrated in its own special area, although some of these, of course, overlap.

On these maps the suburbs mostly show up as large white spaces, empty of the dots and slanted lines and cross-hatching that indicate conditions other than whiteness, middle-classness and ethnic anonymity.

Ms. Humphrey describes suburbia as "a comfortable but bland environment devoid of the need for social involvement and lacking in the sense of community that is produced by such involvement.

"Though (the) sense of 'something missing' may be nameless, it has repercussions in the tensions in the suburbs mentioned earlier: The need to protect the homogeneity of this dearly-bought environment from feared incursions by the poor and by blacks, and in the parent-child hostilities engendered by fears of the youth's counter-culture," she said.

She was born in England but grew up mostly in South Africa, where she developed a hatred of racial segregation. Her studies in geography, particularly urban geography, have given her a broader view of racial segregation as the most pernicious but not the only example of how 20th century Americans attempt to classify and order themselves like so many sizes of machine bolts.

Behind that attempt, though she does not delve into it, may lie a rather pathetic need to simplify things in a world grown increasingly complex and unmanageable. What we need more than anything else, it seems, are specific practical techniques for dealing with the facts about the modern world that make us so anxious. Such techniques Ms. Humphrey does not offer – but then, neither does anyone else.

She can only pose an ideal city, one where myriad cultures, life-styles, points of view bounce off each other like dodge-'em cars, to the general enjoyment of all. Toronto is, to her, that sort of city. Detroit is not. Nor is Highland Park.

But she has some hope that it can be changed. Her urban geography students have recently completed a survey study of the city aimed at discovering how residents, particularly teens, use the city and how they interact.

Preliminary findings seem to indicate a gulf between young and old. Ms. Humphrey would like to see them brought together to make a community where there is now little but mutual dislike. She plans, in fact, to take the survey findings to Highland Park block clubs and try to establish some sort of inter-generational dialogue on mutual problems.

Detroiters hardly talk about racial segregation publicly any more, and have never talked very much about the other kinds. Integration as an ideal has fallen from public favor. But Ms. Humphrey makes it clear that integration of all sorts is exactly what we need.

"What is missing for city and suburban dweller alike," she has written, "is a sense of wholeness ­– an identity beyond his immediate economic or domestic role that provides a sense of personal integrity. Also missing, at the interpersonal scale, are (the) essential social characteristics of community, engagement and dependence…

"It is obvious that while physical need is heavily concentrated in the inner city, psychological need is widespread throughout the urban area."
___
Read the full report: Segregation and Integration: A Geography of People in Metropolitan Detroit
at 6:21 PM